China 3: Yangshou; Wll You Be My Climbing Partner?

After having a delightful western breakfast at my hostel's cafe with a table of French travelers, that is probably convinced that I'm stalking, and a charming Chinese man that worked at the hostel, I set off for Yangshou, my initial destination in this area.

Yangshou is much more of a city than I remembered it being. I walked along the river taking in the sites that can be seen on the 20 Yuan bill and then ran into a Canadian couple that I had met earlier when we were mutual lost (a fair portion of my relationships begin this way) in front of the free outdoor climbing wall.

I don't think words can do these two justice. They are two of the few people that know how to live. They are thoughtful about how they live their lives (unconstrained by social expectations) and have found the recipe for their own happiness. The woman is a gorgeous, red-headed, down to earth life coach that is truly inspiring by how much she genuinely cares about people and about living out your her own values (I'll call her "Massage V"). The man is a goofy, thrill-seeking, outdoor athlete (his fortes are climbing and snowboarding) who can put a smile on anyone's face (I'll call him "High Five A"). They are a winning combination.

One thing that comes with being a tourist, especially a Caucasian tourist, is being the target of every sales pitch. It is rare that I can take 3 steps without being offered something while walking down W. Street (the main shopping/restaurant street) "hello hello, bamboo bamboo." Or the classic "Hello lady (plan A: they frantically flip through the menu trying to find something that catches my eye. Plan B: they pick out something they are certain that I can't resist point to it 7 times (I definitely wouldn't understand if they only pointed once) look at me while exhausting their synonyms of good and then pull out a chair for me regardless of my reaction ) ." High Five A was looking for a climbing partner for the next day and who better to ask than the people that stand outside of every restaurant holding their restaurant's menu? Oh how the tables have turned. Although he didn't have much success recruiting a climbing companion from the solicitors, my abs got a workout from laughing so hard, High Five A found a cheap guide elsewhere, he coerced them into giving him high fives, and we had drinks on the patio....so overall it was a success.

Later that night, I went to the Impressions Sanjie Liu performance. This is the world largest natural theater which utilizes the waters of the Li River as its stage. The impressions are derived from the daily life of the people living around the Li River and use singing, lights, and dancing on and around the river to help the audience understand the beauty of the folk songs' hometown. It is divided into several chapters that use color to represent different aspects of life. The performance is divided into several chapters including the preface and epilogue. I found this description online(http://www.travelchinaguide.com/attraction/guangxi/yangshuo/impression-sanjieliu.htm):

"At the beginning, the lights are all turned off and the image of Sanjie appears indistinctly in the sky with beautiful songs 'Sing the folk songs, here I am singing and there you are echoing...'. As the lights come up, the twelve hills appear in front of the audience; and a small fishing boat is rowed from the hills. This is the Preface - the Legend of Hills and Rivers.

The first chapter is the Red Impression: Folk Songs. On the water, many fishermen are rowing their bamboo rafts in a column. Either standing or squatting, they hang the large red silk in the sky and or upon the water. This red picture symbolizes the enthusiasm and praises the labors of the local people.

The second chapter is the Green Impression: Garden. The color green symbolizes nature as well as the vitality. Among the green hills and rivers, the smoke from cooking fires curls upward; herders are heading home with their cattle under the gleam of the sunset. The women, washing clothes beside the water are waiting for their husbands who are rowing the fishing rafts back home. This chapter reveals the peaceful and happy life of the local people.

The third chapter is the Golden Impression: Fishing Lights. Hundreds of bamboo rafts with golden fishing lights are spreading all over the river. The rafts, gently rocking make the golden fishing lights dance upon the waters, the straw rain capes, the frolic cormorants and the hills construct a perfect picture describing the simple existence of the people around the Li River.

The fourth chapter is the Blue Impression: Love Songs. Under the deep blue sky, and on the dark blue water, the performer of Sanjie is singing classical love songs. Then, a crescent-shaped boat with a charming fairy dancing in is flying onto the surface of the water. A group of pretty and young girls, dressed in red or white are bathing around the boat. In this blue world, these beautiful girls seem to become the notes of Sanjie's love songs.

The last chapter is the Silvery Impression: Performance Grand Ceremony. As the 'Wonder of Lijiang Culture', this scenery reflects the traditional ceremony in Sanjie's hometown according to the legend. Over 200 Zhuang girls form a long column across the bridge over the Li River. Their silver dresses make the river shimmer in a mysterious manner.

In the Epilogue, the fishing rafts are rowed farther and farther from the audience while the beautiful songs of Sanjie are still echoing among the hills. The girls on the bridge present their thanks for the audience with their affectionate folk songs.

Except for the perfect seven pictures, the performance also boasts both modern and classical music played by famous musicians of China. Additionally, there are in excess of 600 performers, all of whom are local people of the Li River. They present the reality of life for the people in Sanjie's hometown through their primitive and wonderful performances."

In short, it was epic.

One thing that I love about the Chinese is how affectionate they are. It is common to see 2 straight guys with their arms around each other, husbands kissing their wives, piggy back rides and couples holding hands. If you have a significant other, kiss them. If you have a friend, hug them. Sure there a limits to my PDA endorsement but human contact is a beautiful thing.

The next day I met up with Massage V for a Spanish omelet and then roamed around taking in the beautiful karst mountains while she got a foot massage. I bumped into High Five A after he had maxed out climbing for the day and we all enjoyed lunch in W. Street and then I caught the bus to Nanning (the capital of Guangxi). 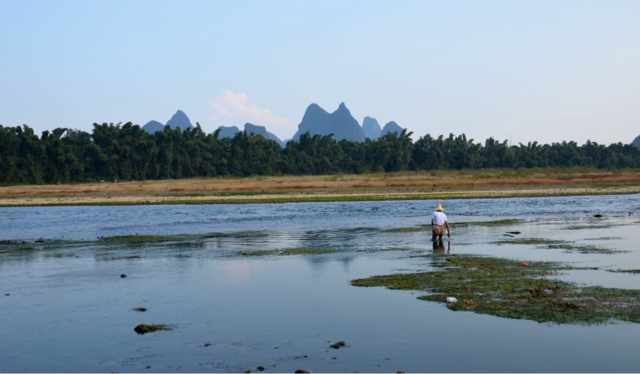 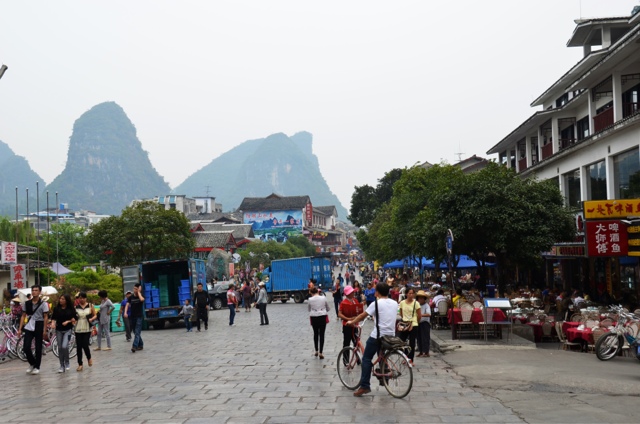 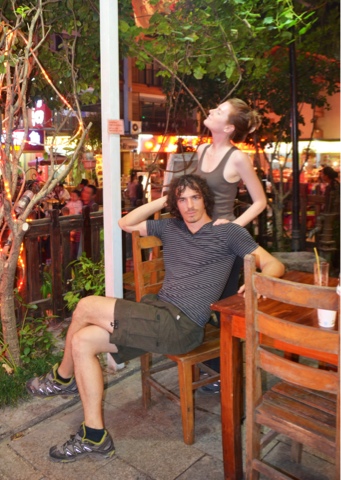 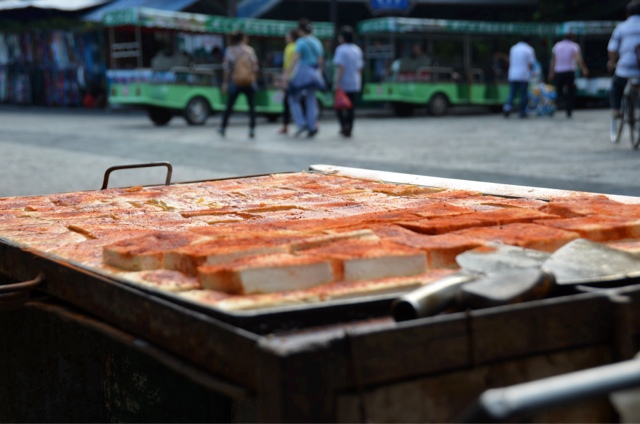 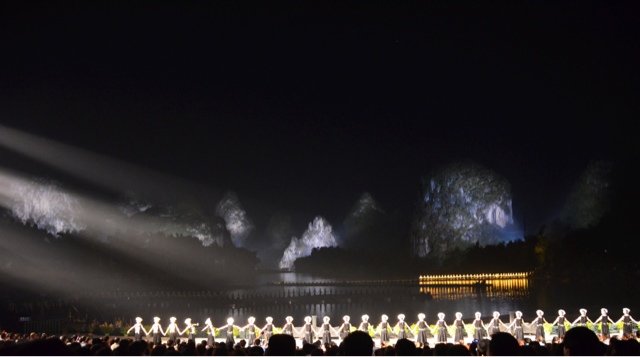