From Pokhara, my two friends, Cali Jerky and Shaved Aussie, and my porter, Dal Bhat Power, began our journey to Machapuchare base camp (MBC) and Annapurna base camp (ABC). Because I am pretty sure the hammocks in Thailand still have my body prints, I opted to hire a porter so that I didn't slow down the crew. Although I quickly realized that I could have made it carrying my own bag, Dal Baht Power's company/humor was invaluable. There is a popular shirt in Nepal that reads: "Dal baht power: 24 hours" (dal baht is a Nepali staple consisting of lentil soup, rice, vegetable curry, pickles and is almost always unlimited). This became our running joke and encouragement throughout the 10 days. The only qualifier is that it must never be said, only yelled i.e. "Danika, how are you doing?" "Couldn't be better, DAL BAHT POWER 24 HOURS!" He also gave me a beginners course in Nepali. Unfortunately the only things I've retained are "delicious" (metu-kana), "I love you" (mo-timlie-maya-gursu), and "thank you" (daanyabaad), which conveniently allows me to confess my love to chefs.

Although I'd like to let on that I survived 10 rough days in the mountains, in actuality I was far from "roughing it." An assortment of food, snacks, and drinks were offered at every tea house and most guesthouses had hot showers available (sometimes even better than in town). The prices for food and accommodation predictably increased with the altitude (rooms ranged from free-$1 at the bottom and $1.50-$2 at the top). I ordered either dal baht, momos, chow mien or pizza (and mint tea) for dinner, porridge (with or without fruit) or muesli with hot milk (and masala tea) for breakfast and pre-bought snacks for lunch; not too shabby. Because few people are crazy enough to hike in the Himalayas in December, we usually had the trails and guesthouses to ourselves. However, life for the people who live in the mountain villages certainly isn't easy. I constantly saw small sweaty men and women carry heavy loads up and down steep stairs. Heavy gas tanks, cement, snacks and tourists bags were supported by meek Nepali frames.

There are guesthouses every hour or so we basically just walked until we didn't want to anymore
Our itinerary:
1)Pokhara ->Naya pul->Ghandruk 2) Jhinu 3)Deorali 4)MBC 5)ABC 6)ABC 7)Chhomrong 8) Tadapani 9)Ghorepani (poon hill for sunset and sunrise) 10)Naya pul ->Pokhara

Our second day we made the genius decision to make it a short day (only 3 hrs of hiking) in order to spend the majority of the day soaking in the natural hot springs at Jhinu. The hot springs is located a few meters from the Modi River and attracts a wide range of people, including the legendary H from "dirty Jers", a group of Boulderites and a Chilean couple. Cali Jerky and Shaved Aussie outsoaked me by an hour (a total of 5 hours) but we all left sufficiently pruned and satisfied.

The journey up to the base camps was gorgeous. Rice terraces, waterfalls, mountain villages and the cool blue Modi River filled the valley. The only traffic jams were caused by sheep, goats or cows and my ears were delighted about the absence of honking. The combination of inheriting my dad's brisk walking pace and my lack of a heavy load enabled me to walk ahead of the crew and then soak in my surroundings. Instead of a slow increase in elevation, we trekked up and down hills the entire journey. In order to prevent altitude sickness we decided to stay at MBC (3,729 m.) one night before heading to our final destination, ABC (4130 m.).

Machapuchare (6,993 m), meaning "fish tail" is considered sacred to the God Shiva, making climbing it prohibited. In fact, it has never been climbed to its summit. According to wikipedia, "The only attempt was in 1957 by a British team led by Jimmy Roberts. Climbers Wilfrid Noyce and A. D. M. Cox climbed to within 50 m of the summit via the north ridge, but did not complete the ascent; they had promised not to set foot on the actual summit. Since then, the mountain has been declared sacred, and it is now forbidden to climbers."

Annapurna 1 (8,091 m) means "goddess of the harvest" and is the world's 10th largest mountain. Annapurna is a section of the Himalayas that includes Annapurna I, thirteen additional peaks over 7,000 m and 16 more over 6,000 m. The Annapurna peaks are some of the worlds most dangerous to climb. Since the first ascent in 1950, Annapurna has only been climbed by about 130 people, and approximately 53 have died trying (41%).

The morning we stayed at MBC I woke up bright and early like a kid on Christmas morning, but when I went outside I found the equivalent of coal. White clouds wrapped my much anticipated pink sunrise view and a meter of snow blanketed the ground. I made the best of the situation and instigated a snow ball fight with the guesthouse owners and a Chinese couple. Shortly after I was all snowballed out, it stopped snowing and the clouds parted, resulting in a stunning view of Annapurna S and Machapuchare; I think I heard angels sing. We quickly packed our bags and set off for ABC. Not long after we arrived, the clarity window closed and we were left in the middle of an endless cloud of white, preventing us from seeing the sunset. Full of hope of seeing the mountains that lay at my feet one more time I stayed at ABC one more day while Cali Jerky and Shaved Aussie decided to head back to get 2 more days in the hot springs. I had every intention of making a snowman but my procrastination and the freezing temperature were more powerful than my creative ambitions. I hit it off with a Swiss couple who are biking around the world and like me, stayed at ABC an extra day. At Annapurna base camp I learned an invaluable phrase: moon-dada-ju-sayo. This means "close the door" in Korean. Both days I stayed at ABC, Korean tour groups (and their chicken Kim chi) filled the kotatsu-esque dinner table and brought in the cold by forgetting to close the door behind them, making moon-dada-ju-sayo a frequent and necessary saying. There are several signs leading up to the base camps stating that meat is not allowed due to ancient beliefs, the holy temple and the natural sacred mountains "if so natural calamities and personal accident may occur." You can imagine my surprise to see tour guides bringing meat to the base camp for the Koreans...I guess money speaks louder than holiness. Apparently they weren't joking about the natural calamity part. My reward for spending two days indoors waiting for the snow to stop was a meteor shower; nature's consultation prize: accepted.

Dal Bhat power, the Swiss couple and I weren't done with the Annapurna range so we set off of Poon hill, known for it's spectacular mountain range views. Along the way to poon hill the Swiss bikers and I picked up a top notch crew. It consisted of a hilarious Chinese man that spoke strictly in onomatopoeia (in addition to drawing pictures/numbers in the sand with his walking stick) and a couple of Americans who worked on organic farms in Mass., one of which decided that watercolors and nun-chucks were more important to bring to the Himalayas than a camera. We saw a sunset at Tatopani that was so spectacular that if I didn't have pictures as proof that it was real I would have thought it was a dream. I also got the pleasure of staying at Dal Baht Power's village sisters guesthouse and talking to her by the fireplace. I marched up to Poon Hill for the sunset and then again for the sunrise; I was blessed to get pristine views of Dhaulagiri (world's 7th tallest mountain), Annapurna S, Annapurna 1, and Machapuchare.

When I reached Pokhara a slight depression came over me, I already missed the mountains. If only time and money allowed for another trek... 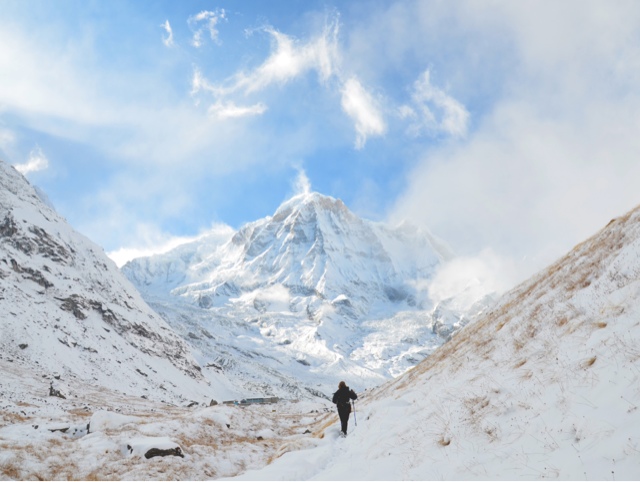 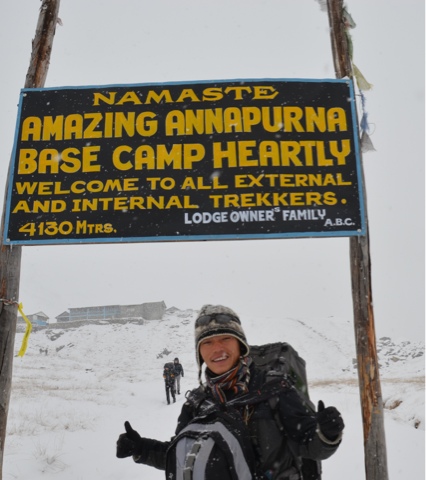 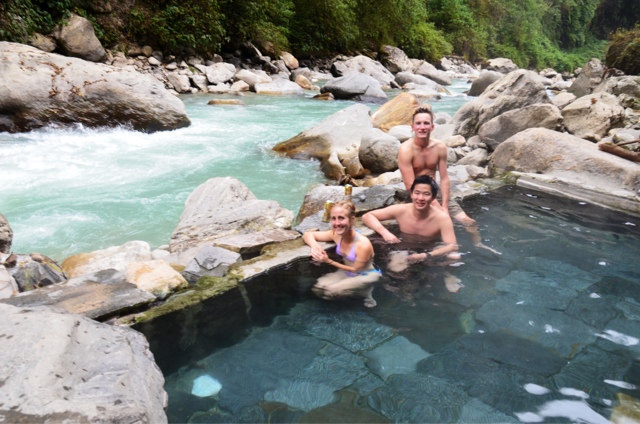 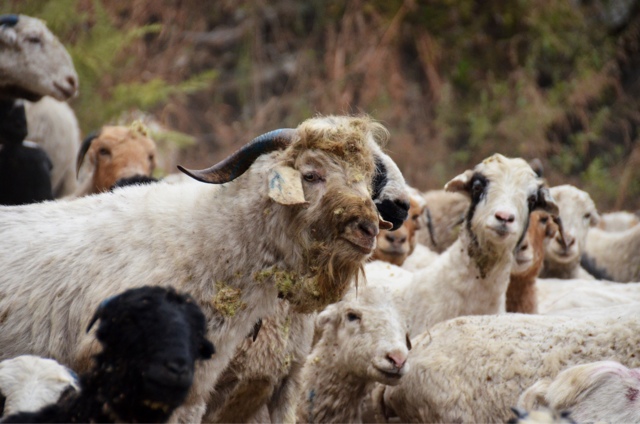 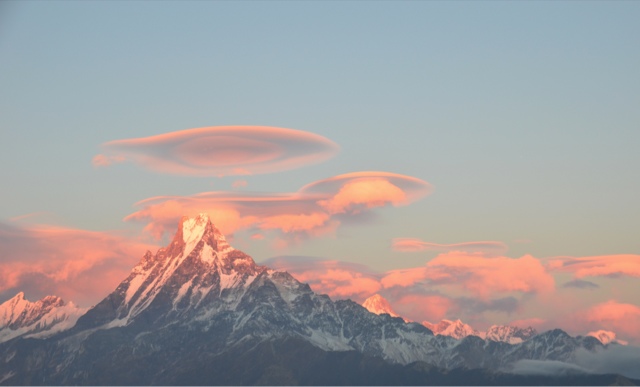 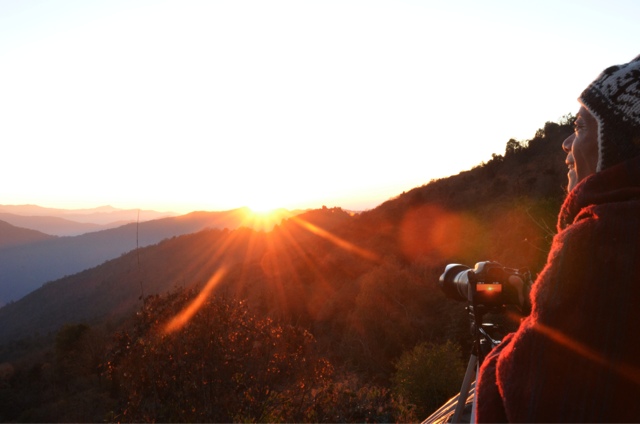 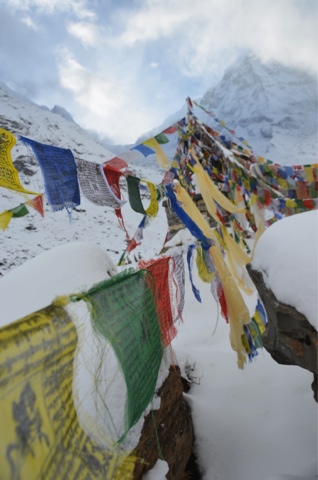 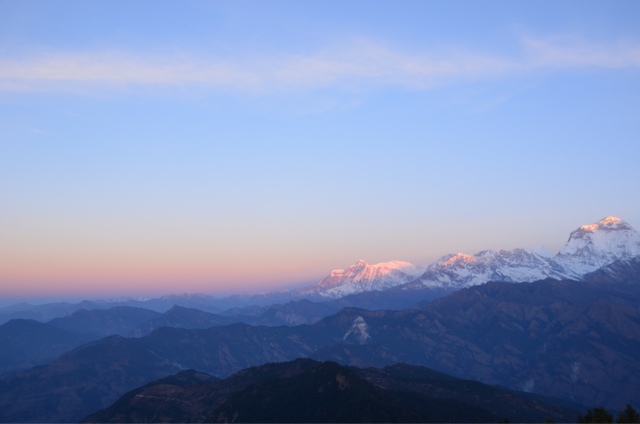 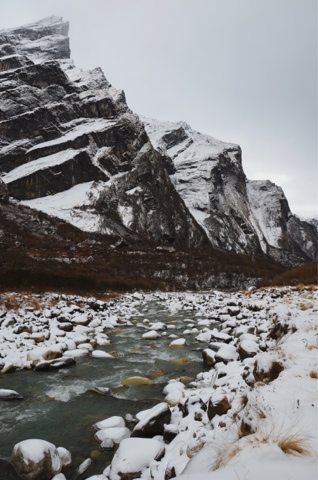 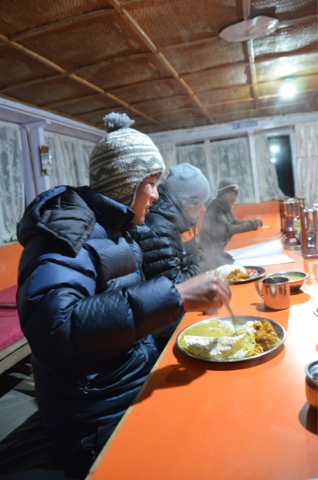